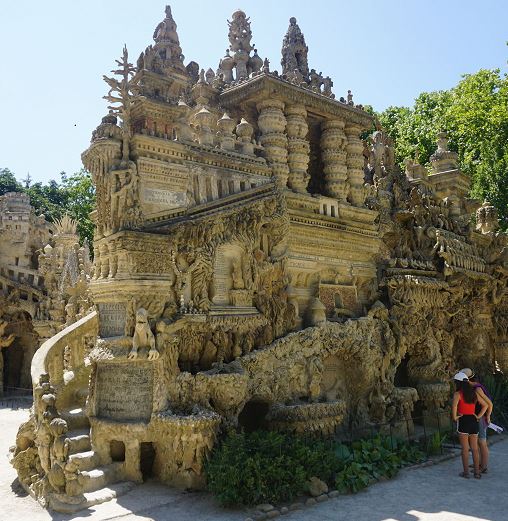 Le Palais ideal which translates to the “Ideal Palace” in French was built by Ferdinand Cheval (1836-1924) who spent thirty-three years of his life building it in Haut rives. Even though it is independent of any artistic trend and built according to no architectural rules, Le Palais ideal has continued to inspire artists for more than a century. The Surrealists have always admired the Ideal Palace and it is regarded as an Outsider Art Work (any work of art produced by an untrained idiosyncratic artist). His work is considered to be an exceptional example of architecture.
Meticulously designed pillars, buttresses, and grottoes classify the Palace which is 26m long and 10m wide. Ferdinand Cheval tripped on a peculiar pebble on his mail route and was so fascinated by it that it reminded him of his dream 15 years back, and thus he decided to build Le Palais ideal. While his neighbors used to criticize and mock his work, it couldn’t stop him from continuing his building. However, that opinion changed very soon when he completed his masterpiece!